The Balloons Have It...

There's magic in many unexpected things...not half. 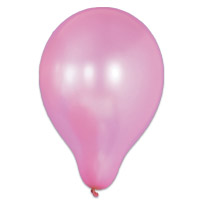 A Balloon, if you will.
Who knew that such a world of possibilities would be gained from a small air filled rubberised novelty item?
Well, Keith Johnstone knew (http://www.keithjohnstone.com/) being the maestro of play, of course he knew.  I attended one of Keith's courses in London and he used balloons to assist with character dynamics.   It was truly amazing work.
My creative balloon journey began though with Teresa Arajuzo of Stone Crabs Theatre (http://www.stonecrabs.co.uk/).  I was attending a brilliant and inspiring weekend workshop with Teresa - we'd come back from lunch to be asked to participate in a relaxation exercise on the floor.   We came to the end of this experience, lying with our eyes closed, all chilled out and ready for action, when music started to play.  When we opened our eyes we were surrounded with scores of balloons - it didn't take long for the fun to begin. 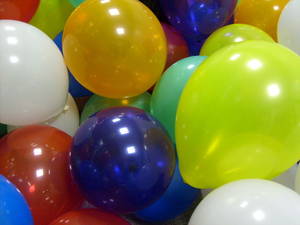 Blow Gabriel Blow!
Balloons have made quite a reappearance for me this month...I've been using them in SCAM rehearsals with New Strides Productions - using them as a means by which to playfully explore relationship dynamics and to discover possibilities within the text.
My beam could not have been broader during this process - rehearsal at its best.  We were in a gazebo, somewhere in Coldingham, doing an 'anger run' with balloons!  The actors went peanuts, and beautiful, chaotic balloon carnage followed...more importantly, the text flew out of them in a dynamic, authentic fashion and there was a very real sense of risk in the scene.  It was a joy to witness.
My balloon journey was randomly continued with a bunch of kids in a school in South London - we were engaging in a physical comedy workshop...and the balloons became the source of all inspiration.  The hit of the month.  A delightful afternoon was had by all...especially me! 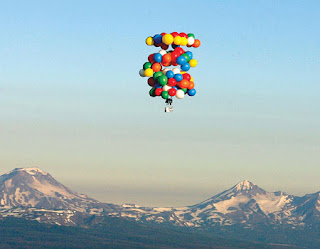 One man and his balloons - now that's what I call inspiration!
On each occasion with the balloons:
We felt safe.
We felt like being a bit silly.
We felt the need to be playful.
After all, balloons are fun...with or without strings attached.
Here's to wherever balloons can take us!
They can make us want to sing:
99 Red Balloons
They can be the impetus for higher thinking (no pun intended)
Sylvia Plath, if you please:
Since Christmas they have lived with us,
Guileless and clear,
Oval soul-animals,
Taking up half the space,
Moving and rubbing on the silk

Invisible air drifts,
Giving a shriek and pop
When attacked, then scooting to rest, barely trembling.
Yellow cathead, blue fish--------
Such queer moons we live with

The heart like wishes or free
Peacocks blessing
Old ground with a feather
Beaten in starry metals.
Your small

Brother is making
His balloon squeak like a cat.
Seeming to see
A funny pink world he might eat on the other side of it,
He bites,

"Theatre should be free, like air or water or love" - Joans enduring philosophy...

Exploring women's rituals during the initial devise week at lovely rehearsal venue, The Pleasance Islington. - two years later and I am starting production...it's a long road when you've not a lot of cash!